Today is a national holiday in Hungary- International Worker’s Day. Mark told me that in celebration, there would be an air show over the Danube with Red Bull planes putting on a show and a jumbo jet flying through the famous Chain Bridge. It started at 10 and I attempted to get up in time to see it…but I didn’t. I left my room at about 11 and the show appeared to be over by the time I walked to the river. Oh well. I walked over to Karavan again to have lunch- this time a chicken tortilla salad. There were two guys sitting across from me and apparently one was an American movie producer and the other a British play actor. Not that I was eavesdropping 😉 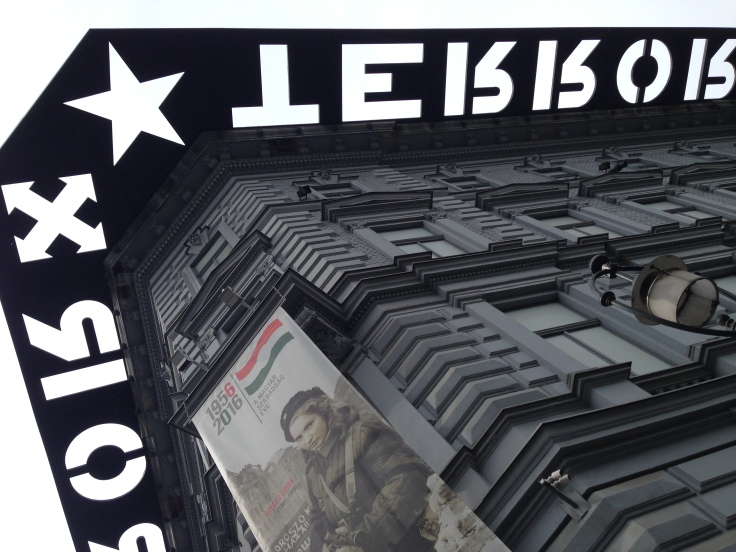 Then I went to the House of Terror which is a museum about the history of the secret Nazi and Soviet police during WWII and the subsequent Soviet occupation. It’s in the building of the old headquarters of both the Nazi and Soviet police so it was interesting to read about everything that had actually happened in that building. I chose not to get an audio guide which I think was a big mistake. I was pretty lost. The museum is 4 floors and I swear they told me to start in the basement and then work my way up. So I walked down the stairs to the basement where the political prisoners were kept and interviewed/tortured during Nazi and Soviet occupation. There were a lot of films interviewing survivors of the prison and the work camps a lot of Hungarians were sent to (there were English subtitles) which was really moving. Once I had made my way through the basement and to the other side, there was no way to get up to the next floor…so I had to walk back through the basement to the stairs I originally walked down. Ok, no biggie. Then I walked up to the first floor (2nd to us Americans- the ground floor was a café and museum store). In almost every room there is a piece of paper with information about what time period the room relates to and what was going on in Budapest…well the rooms seem to jump around a lot and there’s A LOT of information to try to read on all of these sheets. None of the info sheets really seem to correlate to the room you’re in and they don’t tell you what happened in this specific room, just about a time period. And since they didn’t appear to be in order you could be reading about peasants in 1965 and then about the Nazi concentration camps in 1945 and then the Soviet occupation in 1950. It was very strange. But I got through the first and second floor exhibits and at the end of the second floor the only way down is an elevator that shows a video interviewing the man in charge of cleaning up the executions that occurred, which was sad, but interesting. And then you end up in the basement again! So I walked through the basement for a third time lol so maybe I had it backwards? Start on the 2nd floor and end up in the basement? Hmmm I’ll never know. The history of the building and the videos interviewing survivors were very interesting, but overall it was less than impressive. But I admit that it was probably my fault for being cheap and not getting an audio guide. Oh well.

After this I stopped at Starbucks and got a hot tea in an adorable cup! Then I went back to the hostel to drop off all of the papers I had gotten at the House of Terror. I ended up skyping with mom and dad for about an hour then I went to one of the train stations to see about getting a ticket to Balatonfüred. The only options were leaving Budapest at like 6pm and arriving in Balatonfüred at 8pm. I was really hoping to get there earlier since I only have the one full day there and I don’t like to arrive in a new city when its dark. I decided I would research if there were other options online first and then decide what to buy. I walked around and grabbed dinner at a pizza place. While I was there it started to pour, but luckily it was mostly stopped by the time I left to catch the metro back to the hostel. I researched other ticket options and found lots more options! I bought one online that left Budapest at 11:45am and got into Balatonfüred  at 2pm which seemed like a much better time. I would just have to pick up my ticket at one of the 4 major train stations here which I figured I could do the next day. I also researched how to get from Balatonfüred to Novi Sad, Serbia- my next destination. Turns out this won’t be so easy. There was an option that would get me there in 1 day, but I would have to transfer train stations in Budapest within like 30 minutes, which is doable, but seemed like it was probably cutting it a bit close. Plus, I’d have to leave Balatonfüred really early Thursday. So instead I decided I would come back to Budapest (there are a lot of trains between Budapest and Balatonfüred daily) and spend the night Thursday- Cinco de Mayo! Erika was kind enough to look up Cinco de Mayo parties in Budapest for me and the only one we could really find occurred on May 7th…Siete de Mayo? Something must have gotten lost in translation lol so probably no party, but maybe I’ll go to one of the Mexican restaurants here. It’s probably best there’s no party since I bought a ticket that leaves Budapest at 8:05am! This is the longest journey I’ll have gone on so I won’t get into Novi Sad until the afternoon. I got a bed in a hostel that’s right next to the train station though, so that should be helpful.

Tomorrow is my last day in Budapest so I gotta make the most of it! Off to bed.