I have now officially been in Copenhagen for a month! Time has flown by and a lot has happened in the last month! When we arrived in Copenhagen, we grabbed a cab to go to my apartment and meet my roommate. Luckily she was real, super nice and the apartment is really cute! My parents stayed for a few more days and they were mostly filled with sightseeing but we did make it to Ikea to get a few things for my room. My mom and I also made it to Tivoli – the second-oldest amusement park in the world and an inspiration for Walt Disney! It was a blast and there were practically no lines! Having to say goodbye to them at the end of the week wasn’t easy, but knowing we can skype and facetime made it a little easier.

Finding somewhere to live – finding somewhere to live was definitely the most stressful part about moving. It was a little bit (ok a lot bit actually) nerve-wracking to decide on a place and send money to a complete stranger from thousands of miles away! There are a lot of students moving to Copenhagen in late summer so apartments go fast (and they are not cheap). The university does not provide much assistance with housing (there is some student housing but you have to get on a waitlist and it has thousands of people on it) so we were on our own to find a place to live. There are a couple websites in Denmark that are like craigslist for housing. I sent probably close to 100 emails about places listed (which is actually not that many compared to some of my classmates – some of them even moved here without a place to live) but luckily I only had to skype with two people. The first one didn’t work out but the second one ended up being perfect.

So Stephanie, my would-be roommate, ended up being real and that was a huge relief. Even better, she was super nice and helpful with everything. The first night, I was able to mostly unpack everything. My room is pretty small (it used to be an office so isn’t officially a bedroom and has no closet) but I managed to get everything to fit.

Becoming a Danish resident – I had started the bureaucratic process of becoming a Danish resident before I left as it takes a while to process the residence permit application. I actually had to go in person to one of the five processing centers in the US in order to have my biometrics scanned and paperwork checked. I decided to go to Houston as it was actually the easiest/cheapest option to get to. The appointment there was pretty stupid (and long) and it seemed unnecessary to have to go to one of only five locations, but it was actually seamless once it was all done. The workers there process visa and resident applications for a whole bunch of European countries so they had no specific information for me about my Danish application.

About two months later, in late July, I received an email saying my residence permit had been approved! Phew! But of course, you can’t actually get your resident card until you’re in the country and registered there so wasn’t really official yet.

Once I arrived in Copenhagen, I was supposed to register with the state within 5 days for my CPR (Civil Registration System) number. This number is like a social security number and is needed for a lot of things in Denmark. In addition to proving I was legally allowed to be there and had a place to live, it also provides me with health insurance. In order to get your CPR number you have to apply online and then wait for an email instructing you to come to the Citizens Service office for an ID check and to retrieve your CPR. This can take up to a few weeks but I got my email about a week and a half after I applied. The email said that Citizens Service was only open for students from 3pm-5pm that day. Figuring it would be busy, I decided to get there a little early. I got there at 2:30 and there were probably already over 100 people in line! It took an hour and a half to check in for the ID check and then they process that so you have to wait again for your name to get called. And that look another hour and a half! But, after three hours at Citizen Service, I finally had my CPR number!

This is a good start, but it is still only a start. In order to order anything state related online (a new health insurance card, an EU health insurance card, a personalized metro card, etc) you have to have a NemID which is given to you by the state. Turns out I could have waited in another line when I got my CPR but that was another long line and since I had already been there over three hours I didn’t feel like waiting. In order to get the NemID you do either have to go in person or you can do it online but it takes like a month to get it that way. So I decided to go to the Citizens Service closer to my flat to get it. Turns out, they couldn’t give the whole thing to me in person because the state doesn’t know enough about me (because I’m new to the country) to ask me questions to properly identify myself. Which seems really crazy since they could verify my passport and CPR – so how was that not enough?! Anyways, the lady gives me the NemID and a sealed envelope and tells me that a key code will arrive to my address in 2-3 weeks and when I get that then I can log in and use my NemID.

The key code came a couple of days later actually and it was just three credit card sized cards that have a bunch of random numbers and then a code next to each number. So every time you log in with your NemID you will be given a number and you have to put in the code that’s on this key code master list! It seems like an unnecessary extra step especially if you aren’t home when you need to log in.

A few days after that, I also received my residence card and my yellow card in the mail. The yellow card is the card which signals that you are legally allowed to reside in Denmark and has your health insurance information on it. With these things, the bureaucratic part is complete! All in all, it was a lot of paperwork and waiting, but the actual process itself was pretty simple, so I’m thankful for that.

School – We are now 3 weeks into school! It’s a lot of readings (but no homework associated with it), but I am actually really enjoying the topics and classes. I am currently taking two classes – Intro to African Studies and Nature, Populations & Society. I have each class twice a week on Tuesdays and Thursdays. It’s nice that the load isn’t too much while getting used to being back in school again. And it leaves a lot of room for traveling on long weekends 🙂

Classmates – My classmates are amazing!! There are about 25 of us and about half of them are Danish and half are from elsewhere. There are two other Americans and the others are from Finland, Sweden, Czech Republic, the UK, Germany, Italy, Belgium, Ghana and Kenya.

We’ve all become pretty close and tend to hang out at least once or twice a week outside of school, which has made moving to a new country much, much easier! 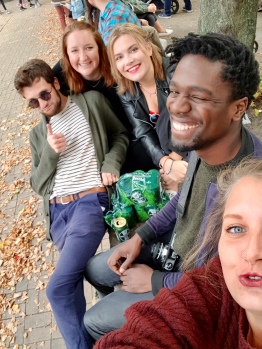 Life in general – All in all, I am definitely enjoying my time here. It’s hard at times, but having a routine and making friends has helped to make it feel like home! I even got to visit Sterling in London last week while he was there for work! It was so fun to be able to hop over for just a night. I haven’t done any other traveling around, but I have some places close by I want to head for weekend trips soon – Sweden, Norway and other places in Denmark! Stay tuned for more 🙂