Well, I left Seattle at 4:30pm on Saturday and I made it to Vienna on Sunday afternoon! My flight from Seattle to Frankfurt was long, which wasn’t helped by the crying baby for most of the way and the guy sitting behind me forcibly tapping his entertainment screen on the back of my chair almost the entire time. I did get to sleep for most of it, it just wasn’t that great of sleep (although is it ever really on airplanes?). My layover in Frankfurt was about 3 hours and was pretty uneventful- I made it through passport security quickly and just hung out the rest of the time. The flight from Frankfurt to Vienna was only an hour and a half and I slept through most of it. Because Austria and Germany are part of the Schengen Area (an area of 26 European countries that have abolished passport and any other type of border control at their mutual borders) I didn’t have to go through passport security again, which was nice, time-wise, but means I didn’t get another stamp in my passport 😦 and won’t until I leave the Schengen Area- which could not be until June. So after I retrieved my suitcase (yay it made it!) I went out to catch a bus that the hostel recommended as the easiest way to get to the hostel. The bus was about 45 minutes into town and stopped at the Westbahnhof train station where it was supposed to be an easy 5 minute walk to the hostel. Well the map provided wasn’t the most useful so I got lost for about 20 minutes kinda just walking in circles hoping to find the street I needed. I knew even if I was slower than the hostel’s suggested walking time (I’d blame it on the jetlag and suitcase) that I wasn’t THAT slow so obviously had to be going the wrong way. I figured it out and finally made it to the hostel. Check in was easy and the staff seem really nice here. I am in room 21 bed 3. There are 4 beds total in my all-girls dorm. The room is small, but it serves it’s purpose and comes with free luggage lockers inside so that’s nice. (Mine is the upper yellow one- I hadn’t put my sheets or comforter on it yet.) 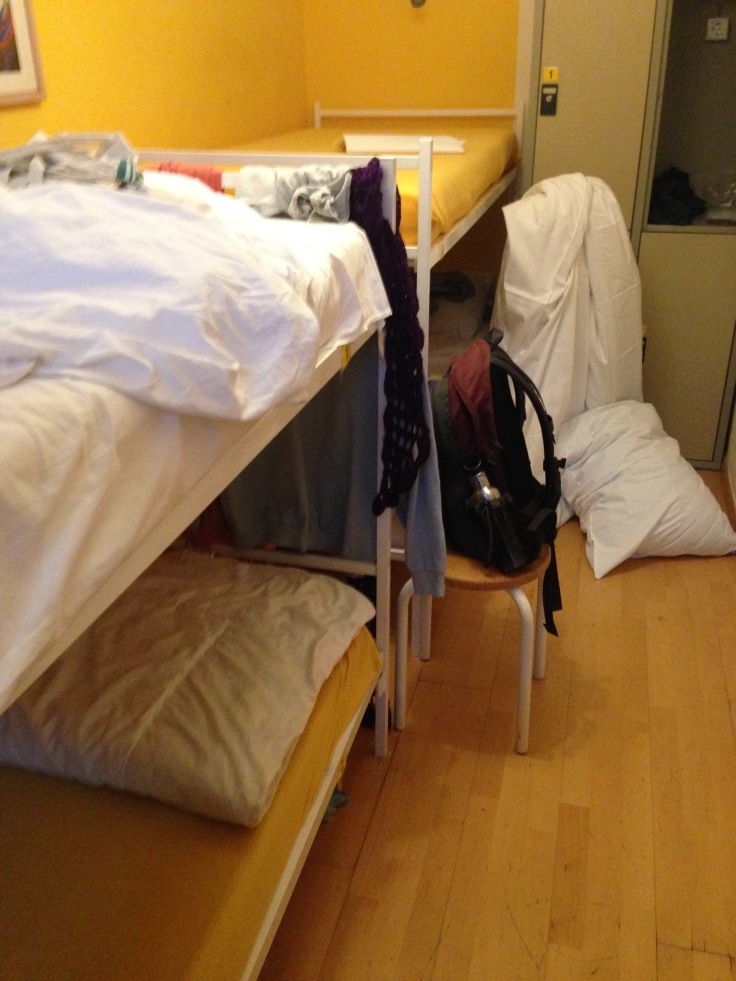 The first night in the hostel I came downstairs to the lounge/bar and got a beer (during happy hour, which is from 6-8pm) it costs 1.50 Euro for .3 liters and 2.30 Euro for .5 liters). While I was loungin’ with my beer, a woman came and sat with me. Her name is Kate, she is from Wisconsin, she’s working on her PhD and just finished a Semester at Sea as an Associate Dean so she just spent the last 4 months traveling through mostly Asia and Africa with some 550 students aboard a ship. She had some really fascinating stories from her time aboard Semester at Sea and from studying abroad in Paris and China. Her mom and sister were coming to meet her the next day and they were traveling throughout Eastern Europe together for 3 weeks- much like my itinerary they are going from Vienna to Bratislava to Budapest. We exchanged ideas on what to do in those cities and how to get to them, which was fun. After Kate left I went to get some food (oh, she also shared her spring rolls with me- so nice! But it made me realize how hungry I was) and ended up just getting a slice of pizza from a restaurant about a block from the hostel since it was almost 9pm at this point and I wasn’t looking for a sit down experience. I brought the slice back to the hostel and had another beer when 2 guys asked to join my table- Samuel (28) from Chile and Howard (21) from Norway who had just met in the bar that night. We talked a lot about our plans for traveling and where they had already been. At one point, another American girl, Sage, joined our table. Sage was on a university trip traveling around Europe and “taking” class. She said they didn’t actually end up having many classes, but they all traveled around together with their teachers just in case. Sounds like my kind of semester! Kate went to school in New York, but I can’t remember exactly where. Then we met Dave from the UK and we decided to go out to a local bar that is popular with travelers, conveniently called the Traveler’s Shack. The atmosphere of the place was really cool- everyone was young and from all over the world. There was this game being played where you try to hammer a nail into a stump of wood in one motion- aka you have to start with the hammer at the edge of the wood and you can’t line up your shot, you just have to go for it. It seems like a very dangerous game to play in a bar with a lot of drunk people. But apparently it’s quite popular in Austria so I guess it can’t be that dangerous? I left with Howard after about 20 minutes there (most of them spent mesmerized by this nail and hammer game) because he was quite drunk and not behaving nicely. So we just came home and I went to bed. I felt bad because I hadn’t met my roommates yet and so their first experience with me was me coming in at like 1am trying to go to bed on my first night in a hostel so I wasn’t exactly coordinated. But, hey, I guess that’s life in hostels right? You don’t exactly seek them out for peace and quiet (or at least that’s what I told myself).

Between the jetlag and drinking, I didn’t end up waking up until like 11am  the next morning (after a brief stint being awake from 5am-7am) so I eventually got out of bed and showered (actually quite a nice shower, although the water does turn off after like 2 minutes so you have to keep turning it back on, but I’m all for saving water). And they actually have blow dryers here for public use! Yay! I decided I should try to get a SIM card so I asked reception where would be best and they pointed me to a store in the mall at the train station. I headed there and asked the person working there for a SIM card and he said they didn’t sell them, but that the post next door did. So I went to the post (yes, the kind of post where you send mail- I was skeptical) and asked the lady at the counter for a SIM card and she asked if I wanted 2 and I said no, just one (again, skeptical- why would I need 2 SIM cards?!) so she brought back a stamp (yes, the kind of stamp that you use to send mail) and I paid .80 Euro for this stamp because I didn’t want to have to tell her I didn’t want it. So now I have a stamp…but no SIM card. I still don’t know if the guy from the original store also didn’t understand what I wanted (it would be pretty stupid to look for stamps in an electronics store, after all) or if it was just the lady at the post  who was confused. Either way, I was hungry so I let it go for the moment. There was a food court at this mall and some of my choices were Subway, McDonald’s, Dunkin’ Donuts and Starbucks. (Sorry for the bad quality, I didn’t want to look too touristy taking photos of Dunkin’ Donuts and all.) 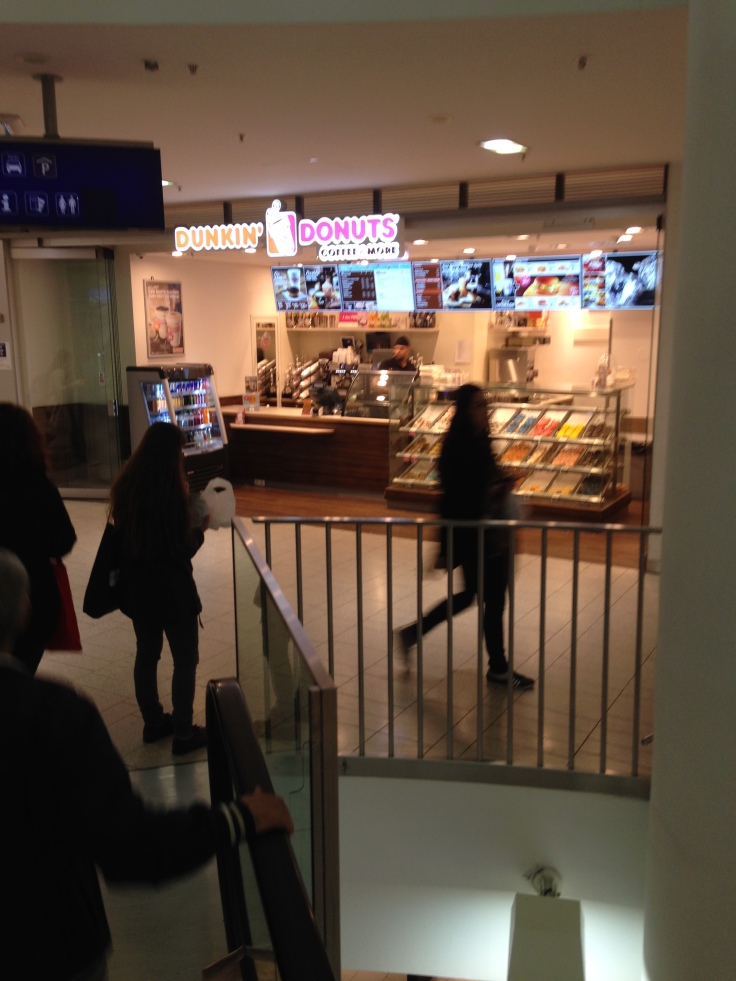 There was also a Claire’s in the mall so I wasn’t convinced I had even left the US! Anyway, I did not go to any of the American restaurants and instead got what was probably Americanized Chinese food at Mr. Lee. Their menu specifically said “Chicken Sweet and Sour” so I felt safe I was actually getting chicken. Now, while I have decided to branch out and try some of the dreaded red meat here, I just couldn’t bring myself to do it in the food court of a mall that’s in a train station. So chicken sweet and sour (with rice!) it was! It wasn’t great, but it did it’s job. Now that I was fed, I could resume looking for a SIM card. But I had given up looking in the mall, so I took a detour and walked by this old church that’s near the mall/hostel. It’s all fenced in right now like it might be going through some restoration or something so it wasn’t exactly a tourist site, but it was a cool church, architecturally wise at least. 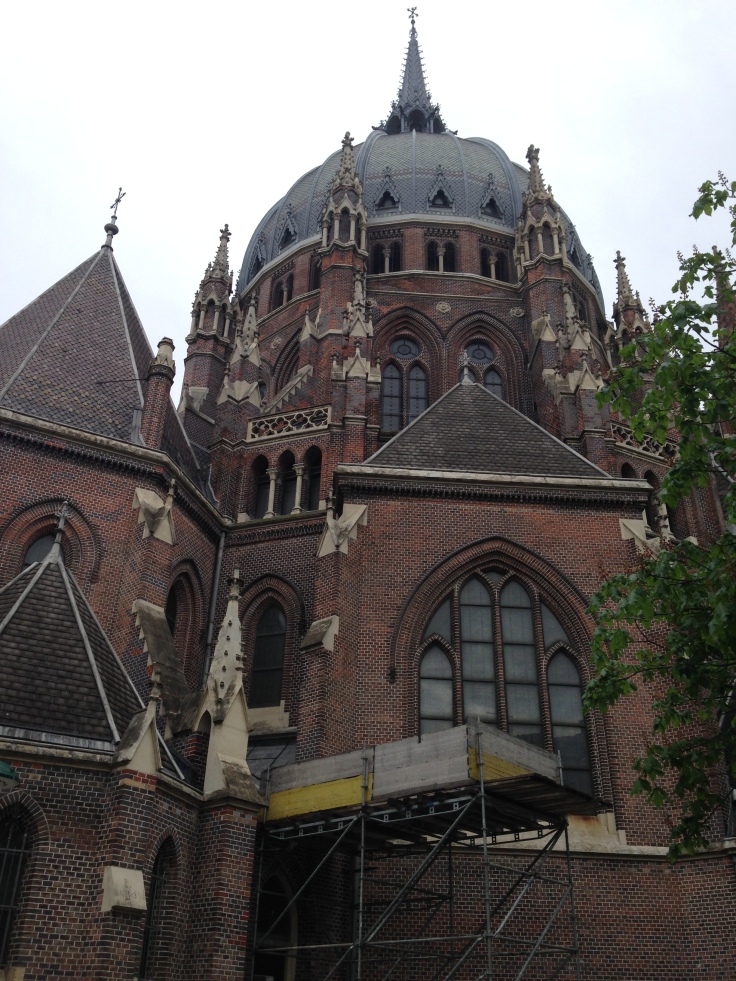 After the church, I decided to try a supermarket for a SIM card, but again no luck. But when I was almost to the hostel, there was a phone store that I figured I’d give a try. Luckily the man spoke English so he understood that I wanted a SIM card, not a stamp. He didn’t have any international ones but said that the one he was selling me would work in other countries, I’d just have to pay roaming fees. So I’ll probably just see how far this one gets me in Bratislava and then either buy a new SIM card there or wait until Budapest. The package I got included 1000 texts, 1000 minutes of calling and 3 GB of data for 9.90 Euro which seemed like a good deal. I paid 20 Euro so I had some extra balance on there to start with. He said that texts and calls would cost .01 Euro per text/minute so I don’t know if that’s after my 1000 free or not, but either way I officially have a working Austrian phone number! If you want that phone number, let me know! Otherwise I am available via Facebook messenger and WhatsApp and when I have wifi I can iMessage. After getting my SIM card I headed back to the hostel and took a nap. My SIM card searching really wiped me out lol