After I awoke from my nap I came down to the lounge with every intention of writing that last blog post. But my new friend Dave was in the lounge with his friend Roane (American guy from NYC/New Orleans) and they invited me to sit with them. So obviously I did that, the blog could wait, friends were more important right now. Dave, Roane and I chatted about Budapest (they had both just come from there and raved about it) and our lives back home when Ryan joined us. Ryan is from Vancouver, BC and had met Dave earlier that day at the hostel. Again, more talking about where they’d been and where we were all headed. Roane and Ryan were both heading to Munich, Germany for Springfest- a beer festival similar to Oktoberfest, but smaller and apparently more fun. Then Roane’s friend, Dea, whom he met in Budapest, joined us. She is from New Zealand and was really fun. Can you keep up with all of these new people?! Don’t worry, I have a “note” on my phone with all of their information to keep them straight. We sat around and drank a beer then decided to go out to dinner. We went to a local restaurant near the hostel for some schnitzel. What do you get when two Americans, a Canadian, an Englishman and a Kiwi walk into a nice quiet restaurant in Vienna? Well, it’s definitely not a nice quiet restaurant anymore, that’s for sure! But we had a great time getting to know  everyone over a beer and dinner. I thought about branching out to the red meat, but since they had chicken I figured I’d save the branching out until I didn’t have another choice (I’ll get there, I promise…baby steps). I got cornflake crusted chicken (yes, that was really the description, even in German) that came with rice and it was delicious! We all also each ordered a liter of beer…to ourselves. Holy crap a liter is A LOT OF BEER! (Roane (right) and Ryan with all of our liters.)

Never again. Actually, never say never 😉 Beer here is cheap and light so in it’s defense it is a lot easier to drink a liter of something that is closer to a budlight equivalent than to drink a liter of IPA back home. It wasn’t easy, but I persevered and managed to finish it. After dinner we went back to the Traveler’s Shack where Dave had the great idea to play Beer Olympics. Luckily this only included the nail/hammer/wood game from the night before. This time we were on teams on 2 and I was partnered with Ryan. There were four teams…Dave and a random girl he found in the bar when it was her turn…Dea and Roane…Me and Ryan…and then 2 other teams of Austrians. I didn’t like our chances (remember this game is very popular in Austria!). We played a slightly different version, but the goal was still to hammer the nail into the wood. Ryan and I didn’t do great, but we didn’t lose…we came in 4th…out of 5. But still, not losing! After the Austrians thoroughly kicked our American/English/Kiwi/Canadian asses they left- proudly. We stayed a bit longer and Dave ordered some pizzas which were actually really good. Then we left as Ryan had to catch a bus at 10am to Salzburg the next day and Dave was off to Prague. I walked Dea back to her hostel (she was staying a few blocks away from ours) and then met Dave in the reception area of our hostel and talked to the staff (there’s someone on duty 24/7!). The girl who was working had just moved to Vienna 3 months ago from North Carolina, but I didn’t get to ask why she made the move. Then it was off to bed!

This morning I woke up at 4am and couldn’t go back to sleep until almost 6. I don’t know what’s going on with me- hopefully it’s just jetlag and I’ll get over it soon. Then I slept until about 10:15 then got showered and ready to go out. I had decided I would go to the Schonbrunn Palace which is the former imperial summer home. I stopped on the way to the palace at a little pizzeria to grab lunch (apparently pizza is becoming my go to in Vienna…). I was the only person in the restaurant so that felt weird, but it was delicious and traditional Italian in that you had to use your knife and fork to eat it. Ahhh to be royal! It’s called the Versailles of Austria and it lives up to its name! The palace itself is quite expensive to get into, but the grounds and garden are free to walk around, so that’s what I did. The grounds are HUGE and they are very well maintained. Directly behind the palace are some tulips and then a large fountain, then up the hill from the fountain is the Gloriette which is just a fancy building at the top of the hill, but it provides amazing views of Vienna- you can see practically everything! The whole thing is pretty surreal- this amazing, huge park that is free to anyone in the middle of a metropolitan city. There’s also the world’s largest zoo in said park, but that was also expensive to get into so I passed. I walked around the grounds for a couple hours (I’m telling you, its HUGE- I walked over 16,000 steps today) and probably didn’t even see 10% of it. It was a mostly sunny day, but it was quite windy so it made it a little chilly. But sitting in the sun felt very nice! The weather is very strange here- it can never really make up it’s mind of what it wants to do…its sprinkling one minute, sunny the next and windy the next. But oh well, it hasn’t been uncomfortably cold or rainy so I can’t complain. After a few hours at the palace I went back to the hostel and (surprise!) took a nap. Remember, I walked over 16,000 steps today! Then I woke up and came downstairs to the lounge to write these blog posts. I’m about to go grab dinner and then decide what I want to do tomorrow. The hostel has a grape grazing tour which I think is basically biking through wine country and stopping for tastings/lunch which sounds pretty nice! I have to go talk to reception about that later. Off to get dinner now! Until next time…

The view of the palace through the waterfall in the fountain. 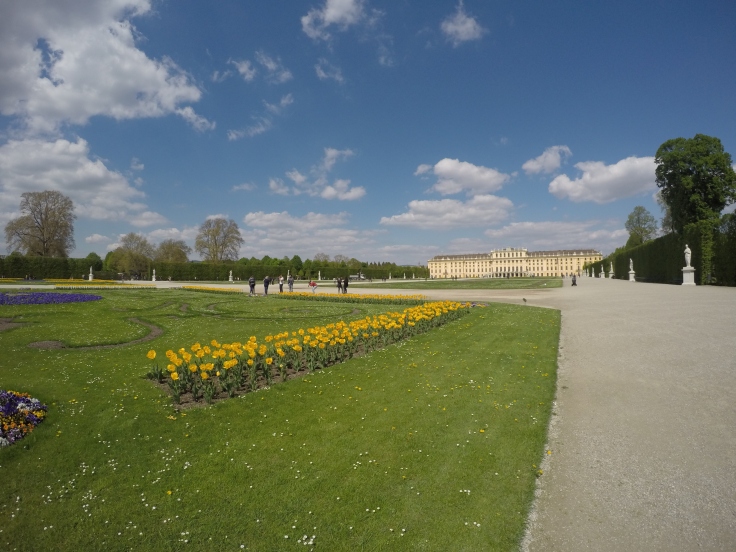 The tulips in the garden with the palace in the background.

One thought on “Fun in Vienna!”