The rest of the bus ride was uneventful and we arrived in Skopje around 3:20 and the walk to the hostel was about 15-20 minutes. The hostel is interesting, it’s not all that clean and there’s only 2 toilets/showers for the up to 19 people that can stay here. That might get interesting.

After I got settled, I went out for a walk around the city. Skopje is in the midst of protests against the government and the protestors throw paint balls on the statues and government buildings. It actually makes the city quite colorful and charming. A couple years ago the government went on a spending spree building probably hundreds of statues around the city in an effort to attract more tourists. Most citizens are pretty mad about this project as it “wasted” millions of dollars. I’ll admit, there are a TON of statues and some are just plain weird, but as a tourist I do find them charming, even though they’re only 2 years old. I’m going on a walking tour tomorrow so I’m sure I’ll get more information on the statues and will fill you in then.

The hostel has free breakfast so I had some cereal and toast. It’s simple, but it’s a nice perk. Then I went to meet up with a walking tour. I ended up being the only one on the tour, which is always a little awkward. We started in the new part of town and he talked about the Skopje 2014 project (the project to build all of the new monuments and statues around the city). The project isn’t finished yet (it started in 2010) but to save money they are using plastic painted to look like old tiles. When you knock on some of the new buildings, they echo because they’re hollow plastic. He talked about the protests as well as most of the statues/monuments we saw had paint all over them. He agreed with what the protesters were protesting, but he didn’t agree with using paint as the government would just use taxes to pay to clean them all and everyone would end up paying more. More fun facts I learned: there was a huge earthquake in Skopje in 1963 and 80% of the city was destroyed. We saw the old train station, 2/3 of which was destroyed in the earthquake. The remaining third has a large clock on it and it stopped at 6:13am- the time the earthquake hit.

Then we crossed the bridge to the old part of town. This side survived the earthquake a lot better. The old bazaar is located here- the second largest bazaar after Istanbul. We stopped at a Turkish cafe to get refreshments. I had a Turkish tea. We explored the bazaar a little and then went to the fortress. You can only access part of the fortress because the government was building a museum in the form of a church on the other part and the Muslims of the city got offended and sabotaged the construction. This was years ago and it still hasn’t been resolved.

The tour was over at this point (it was 1pm and we’d been walking 3 hours) and the guide showed me his favorite local restaurant and asked if I wanted to join him for lunch. I was starving so I accepted and he suggested a traditional meal of Shopska salad (tomatoes, cucumbers, onions and a lot of cheese), bread and beans. Normally I would say I don’t like tomatoes or cucumbers but I ate the entire salad. The beans were similar to the meal Tatiana prepared in Ohrid but obviously not as good. But overall the meal was big and delicious and with a beer only cost $6.50.

After lunch I walked around the bazaar some more and then went to a local brewery the guide had pointed out. I was still really full from lunch so I just sat outside for a while and I must have looked really hot (it was quite warm out, but I didn’t think I was dying) because this table of Dutch guys gave me a cold bottle of water and offered me some of their calamari lol the water I accepted, but I passed on the calamari. When I felt ready to drink beer, I sat on the patio where there was live music! I had a red IPA and it was the first time since Vienna that I’ve had an actual good beer.

Then I headed back to the hostel to relax and get caught up on The Blacklist. At about 7:30 the protesters could be heard marching outside. There were thousands of them just walking through town blowing whistles and carrying signs. I went out to watch them and of course it started sprinkling as soon as I got outside, but it was still cool to see. It also started to thunder and lightening so I went back to the hostel and cooked some soup I had bought for dinner. Then it was some more Netflix and bed.

I had heard a lot about Canyon Matka, which is just a 30-45 bus ride outside of the city so I decided I would go today. The bus was supposed to come at 12:15 but didn’t show up until 12:45 and was packed. The bus was supposed to go all the way to the canyon, but for whatever reason it didn’t. So we had to walk over a mile to the canyon. I’m sure the driver had a perfectly good reason that he shared in Macedonian (probably not) but all he said in English was “finished, please” while gesturing off the bus. And then the canyon wasn’t even that cool. I was starving when I got there so I ate at the restaurant there and it was expensive and flavorless (it was truffle pasta and there was not even a hint of truffle taste!). And of course to catch the bus back I had to walk the mile plus back. I met a nice family from Vancouver at the bus stop who have been traveling the world for 10 months with their 2 young daughters. Luckily this time the bus was only like 15 minutes late. I had also planned to go to the Millennium Cross on the hill above the city after canyon, but with the bus being late and walking to the canyon I had to catch the later bus back to Skopje then I had originally planned. I got back to Skopje around 5 so it was too late to go to the cross. 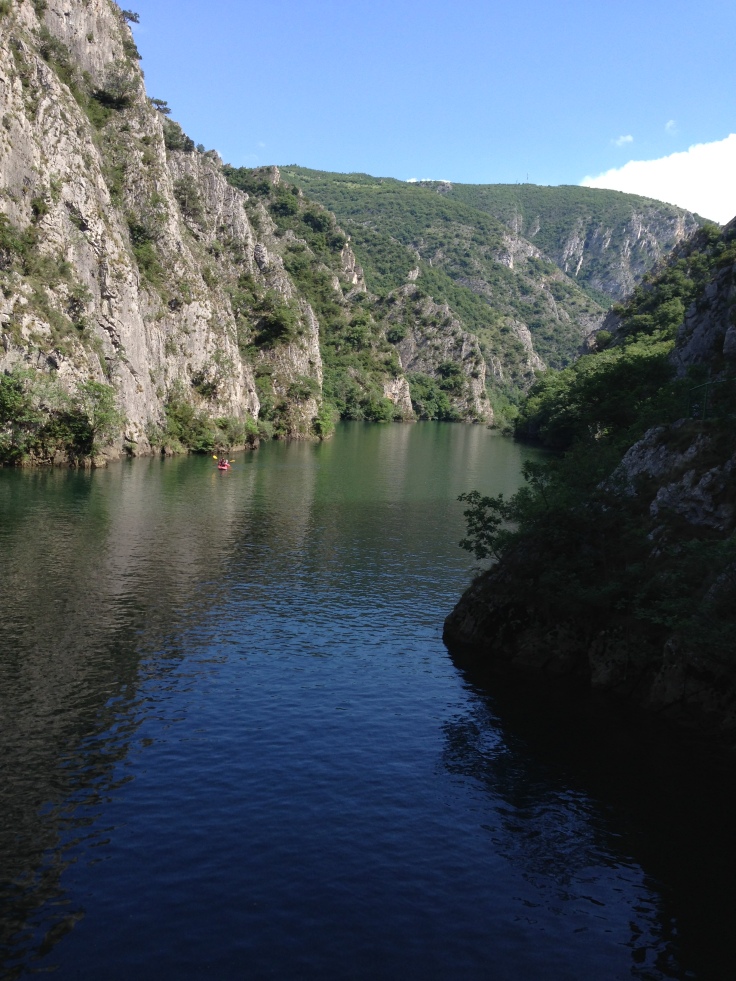 Instead I went to a cafe, ordered a strawberry margarita and watched tennis! Eventually I ordered dinner too 😉

Then I went back to the hostel to shower and pack because I’m off to Nïs, Serbia tomorrow!