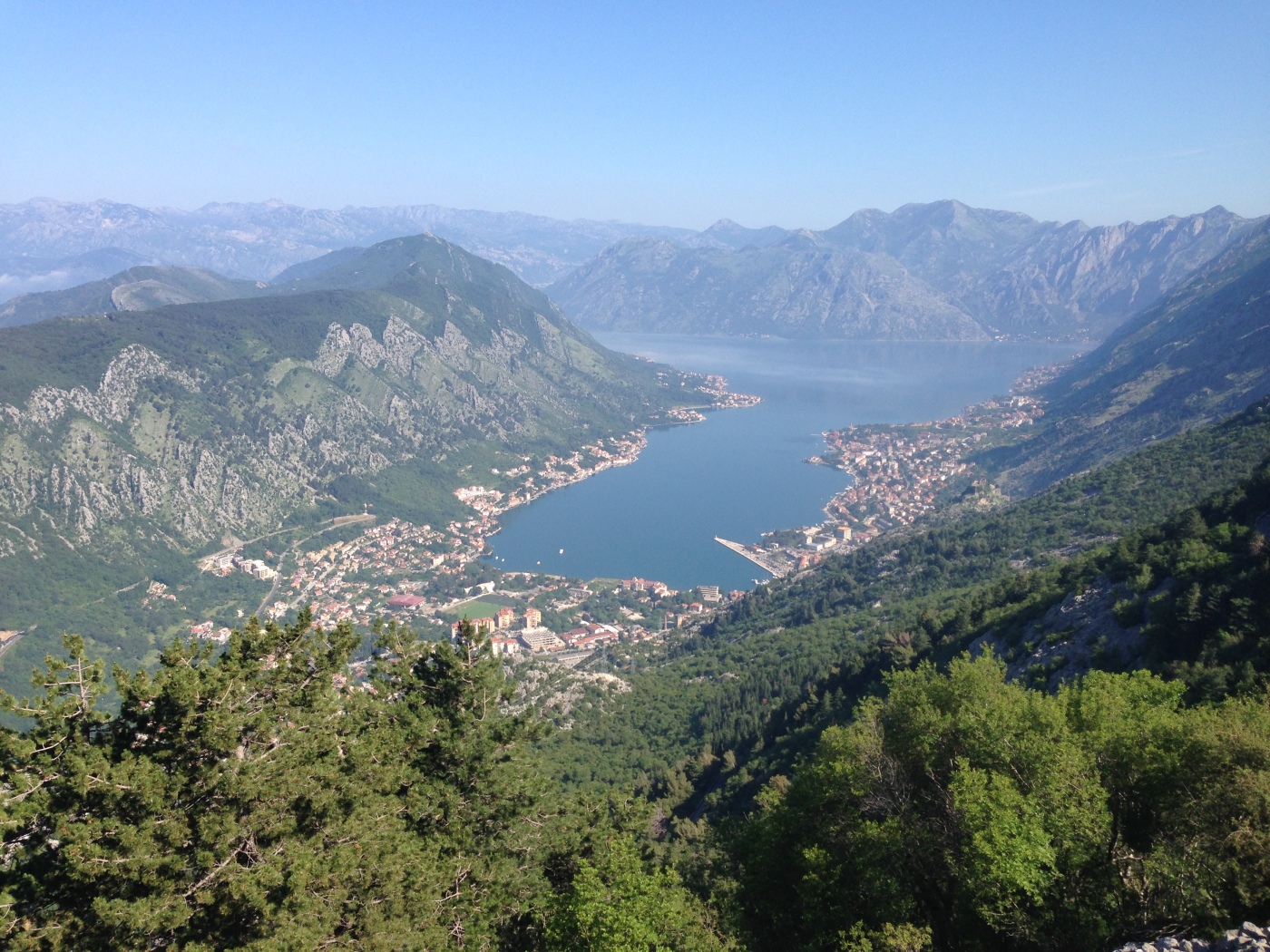 Today I went on an all day tour to see more of Montenegro. We started driving on the old road that Austro-Hungarians built in 1879 to connect Kotor and Cetinje which was the old Royal capital. It has 25 curves up a mountain and is used for a big car race every year which happens to be this Sunday. Then we headed to Njeguši, a village located on the slopes of Mount Lovćen to have breakfast. Breakfast was a smoked prosciutto and cheese sandwich which was very good. While here we all got to know each other better- Sylvia from Latvia (also one of my roommates), Rachael from Rhode Island and George, Matt, Michaela and Sarah from London.

After breakfast we drove up Lovćen to the mausoleum where the greatest Montenegrin ruler, Petar II Petrović Njegoš, is buried. It’s situated 1675m above sea level so you get amazing views of the country. But of course you also have to walk up 461 steps to get to the mausoleum. But the views are worth it.

Then we headed back down the mountain towards Cetinje and did a walking tour through the old Royal capital. When Montenegro started to grow, it was clear Cetinje wasn’t going to be able to handle the growth as it’s located in a valley between 2 mountains so the capital was moved. We have a traditional Montenegrin lunch here. I order “filled chicken leg” and it was actually just 2 chicken breasts with cheese and ham between them like a sandwich. Of course it was delicious though.

After lunch we headed to River Crnojevića, a town on Lake Skadar. We took a boat ride through the river to the lake (it’s huge!). The lake is a national park and is one of the largest bird reserves in Europe.

After Lake Skadar we headed to Budva, the town I had visited yesterday. This experience was much better though since I got more information about the city. Budva is the most visited city in Montenegro and has some really fancy resorts like Sveti Stefan where Madonna has stayed and Novak Djokovic got married. Then it was back to Kotor. Between climbing the fortress the day before and this all day tour (we left at 830 and got back at 9pm) I was pretty exhausted. I had just enough energy to buy a plane ticket from Kosovo to Munich so I can visit Prague and Poland. I’m so far south now that trying to get that far north any other way would have taken days. No thanks.

I slept in this morning and decided to do a boat tour that goes to one of the islands in the bay and to another little town. I went and bought the ticket for the boat and then got lunch and walked around. I also bought my ticket to Tirana for tomorrow.

Then it was boat time! We sailed to Island Lady on the Rock first and spent about 20 minutes exploring, which was more than enough- it’s a tiny island and only has 1 small church on it. I ended up talking with one of the guys on the tour- Steve from Iowa who is in the military and is stationed in Frankfurt.

After the island we sailed to Perast, an old town on the bay a ways down from Kotor. It’s tiny as well and there’s not much to see, but it was cute. And there was a wedding reception about to start right on the water so they were playing music.

Then we headed back to Kotor and Steve and I walked around the old town. Then I went back to the hostel so I could start to pack. I hate packing. Even when I barely take anything out its a pain. But I eventually got packed and went out to find dinner.

The waiters here tend to stand outside the restaurants and try to convince you to eat at their restaurant. So I’ve walked past this one particular restaurant about 5 times already today (it’s a small, small town) and the same waiter is always outside and remembers me every time I walk by and keeps calling me “dear lady” and asking if I’m going to eat there. So this time I gave in and said yes. He was thrilled lol he came to ask me what I wanted to drink and as there was no wine list and I don’t know anything about wine I asked him for a recommendation. He wanted to know if I wanted red or white, and I said it didn’t matter, whatever he recommended. He loved this answer and told his coworker that I was “their guy” (I’m hoping something is lost in translation here and I haven’t started looking like a dude) and proceeded to invite me to said coworkers birthday celebration of eating and drinking later. He assured me everyone would speak English to me so I wouldn’t feel left out lol It seemed like a pretty cool chance to hang out with locals so I accepted. Aleksa (waiter) also recommended the grilled prawns for dinner and of course they come as full prawns so that was an interesting experience trying to get the meat out. I think I did ok for my first time de-prawning! I talked to Aleksa some more and then headed to the hostel to shower and finish packing.

I was to meet Aleksa at 10 at a bar right outside my hostel first so we could finish watching the UEFA champion game. The game went to penalty kicks though so it was almost 1130 by the time it was over. It was fun to watch it though outside in the square. Then it was time for the birthday celebration!

I thought we were going back to the restaurant, but we went to their house (Aleksa and 2 of his coworkers live together). There ended up being 8 others people there and it was a fun night! Turns out most of them are from Serbia and they loved that Serbia has been my favorite country. We listened to a lot of Serbian music and drank Serbian beer. I would say 92% of the conversation was in Serbian but Aleksa translated some things for me. And I got to learn more about their lives in Kotor. They all work in restaurants and earn about €400/month, excluding tips which is why they like American tourists because they say they tip the best. But they also work 10-12 hour days and don’t usually get a day off all month, especially in the high season, so it’s not an easy job. While tonight was a birthday celebration, Aleksa said that they tend to have people over to eat and drink every night after work. I didn’t quite catch it, but it sounds like they spend 6 months in Kotor working and then go back to Serbia. Aleksa did invite me to come back to Serbia in 6 months and stay with his family. He also joked that we should get married and he’d go work in the US and I could live in Serbia with our 5 kids (uh…..5?!?) and he’d send us money. He had me until the 5 kids part cuz…no. But he doesn’t want to live in Seattle he says, he wants to live somewhere warmer and sunnier lol Seattle’s rep has made it all the way to Montenegro! I told him I’d think about it 😉 to sweeten the deal he promised to teach me Serbian.

I begrudgingly got up and caught my bus at 8:30. It wasn’t full so I got a seat to myself 🙂 I was told it’d take about 6 hours so I settled in. It was much easier to get a little bit of sleep when you have the seat to yourself so in total I probably slept a few hours. We stopped in Podgorica, the capital, and Sylvia, from my tour, got on. Podgorica and Kotor are close, but it’s very common to run into roommates from old hostels in the Balkans, especially if you stay at the Balkan Backpacker hostels. In Kotor I ran into a guy from my hostel in Split and another guy from my hostel in Sarajevo. It makes the world feel a little less big when you’re traveling by yourself.

The bus ended up taking over 7 hours…to go 100 miles. It’s pretty impressive how long it takes to get anywhere over here. The hostel was about a 15-20 walk from the bus station. I got checked in and settled, then went to find money and food.

After eating I walked around the city center a little but then some guy started following me. He kept saying all these things to me not in English and I’d tell him that I didn’t understand. And he kept asking me to go to coffee and I just pretended not to understand. And he kept trying to put his arm around my waist and followed me for about 15 minutes while I just walked in circles. And then he asked me for my phone number and I said no. Then he asked for my Facebook and I said no. Then he asked for a photo and I said no. It was clear he wasn’t going to leave me alone and I just wanted to go back to my hostel but I didn’t want him to know where I was staying. So I walked into a random (fancy!) hotel I passed and waited like 20 minutes. The hotel was nice though- it had a big comfy couch in the lobby and free wifi. So after about 20 minutes I walked outside and it appeared he was gone so I booked it for the hostel.

At the hostel I did my laundry, showered and hung out in the common room. When my laundry was done in the washing machine, I hung it all to dry (I haven’t seen a dryer since Budapest) and then headed to bed early.