I got checked out my hostel and hung out in the common room for a little before heading to the bus station which was about a 25-30 minute walk away. As it wasn’t raining, the walk was nice and easy and I arrived at the bus station in plenty of time. I bought my ticket, went to the platform and waited for the bus to arrive. The bus made several stops along the way to drop off and pick up people which made what should have been a 1-1.5 hour trip into almost 3 hours, but whatcha gonna do? There also weren’t enough seats for everyone so several people had to stand which seemed unsafe. But we made it to Mostar with no incidents and I made my way to Hostel Miran, which was less than a 10-minute walk.

Miran, the owner, was not there, but his brother Miram was. That’s going to be confusing. Miran showed up about 5 minutes later and is great! His family lives on the second floor of the hostel and they’re wonderful. Miram showed me around and I signed up to take the Herzegovina tour with Miran the next day. Then I got a map and was off to find food and explore. Miran recommended a place called Food House which really wasn’t all that good for the price. But I got a free welcome drink (rakija) and dessert so that was nice. Then I walked around the Old Town, which is so beautiful! Stari Most, the old bridge, is Mostar’s most famous attraction and it was packed.

The bridge itself is very slippery and isn’t easy to walk on. As I was walking around it started to rain and of course I didn’t bring my umbrella, but I continued walking for a while and eventually headed back to the hostel. At the hostel I went to the common room to go on my computer some and met Hannah who will be going back to Seattle to live next month and work at a hostel in Fremont. I also met Jasmine, from Berkeley. Miran turned the tv on for us but there were only about 10 channels and they were mostly national geographic and history channel. We watched it for a little but then decided we were finished and watched Brooklyn 99 on Jasmine’s laptop. Then it was off to bed.

Today was the tour of Herzegovina with Miran. There were 6 girls on the tour- me and Jasmine, Beth, Jessica and Lindsay also from the US and Emmanuel from Montreal. We started by eating a traditional breakfast of Burek which is a pastry filled with cheese, spinach, meat or potatoes. It’s fairly common in the Balkans so I had had it before, but this one was really good.

On the way to the first destination we took a detour to drive through a “secret” base that was built in 1999 when the Bosnian government was afraid that Russian may attack them. Miran was in the army at this time and was stationed at this base for 3 months, but none of his family could know he was there. Since Russia never attacked, Miran’s military stint was relatively low key, but he had some fun stories. The base is basically a 300-meter tunnel built under a hill across from the airport so we drove through it, which was neat.

Then we were off to Blagaj. Because they’ve had usually high amounts of rain this month, the river was flooded. We drank out of the river as it’s supposed to be good luck. We also visited a Muslim house of prayer and Miran, who is Muslim, explained some aspects of the religion. 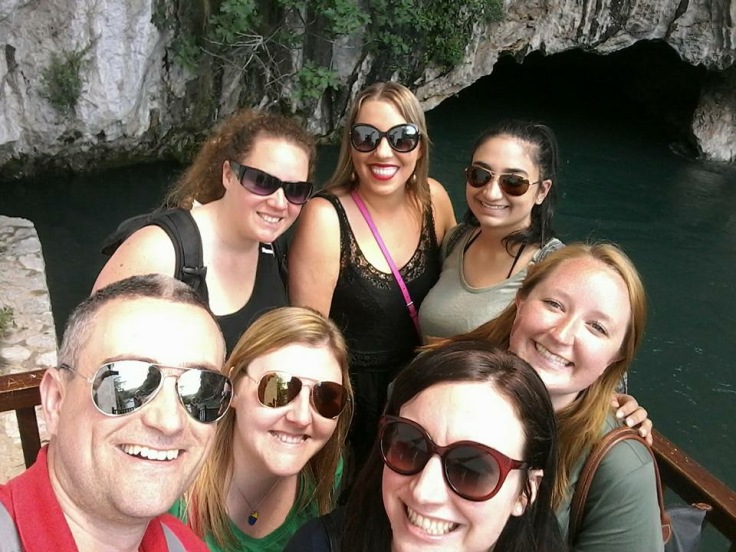 After many pictures, we were off to Pocitelj. Pocitelj is a small, walled town built into a hillside with a fortress at the top that we climbed up to. The fortress is beautiful and the views from the top are spectacular. There’s no ropes or gates preventing you from going anywhere so we explored most of it. 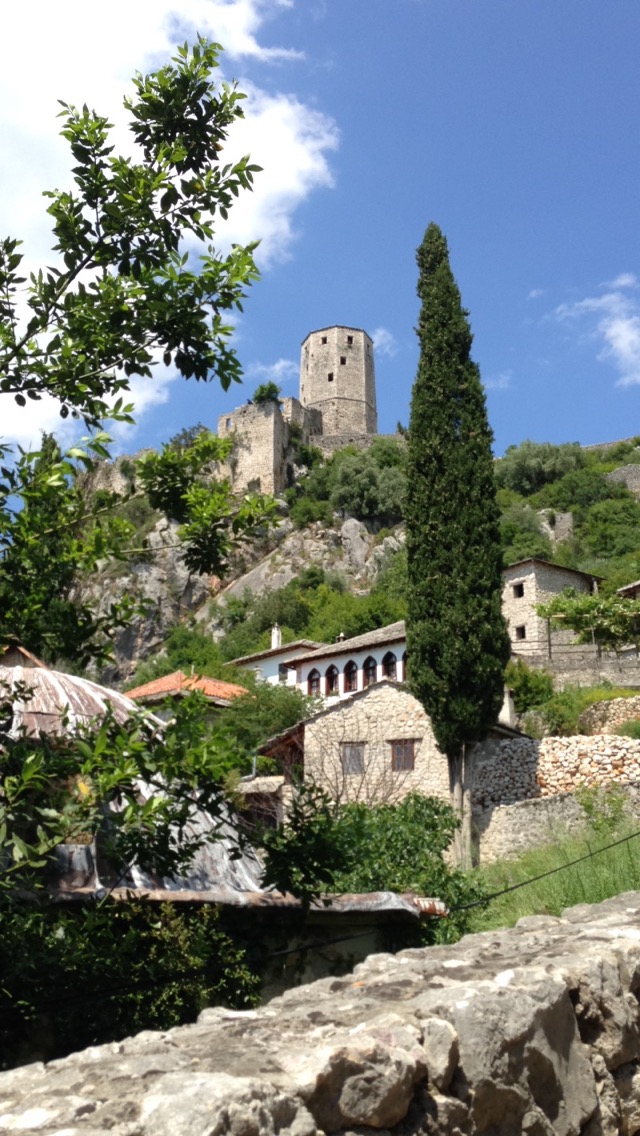 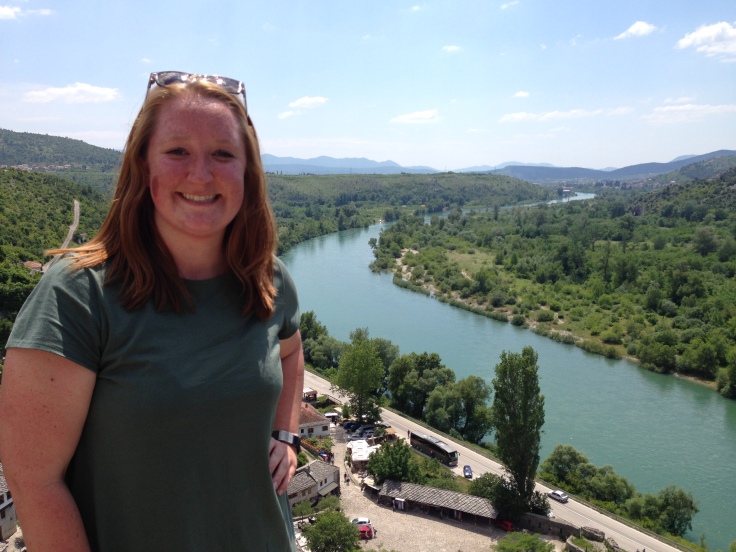 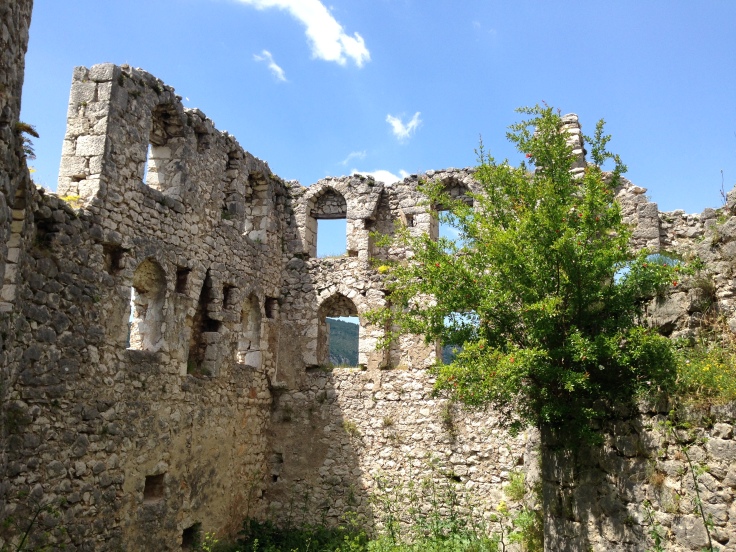 Then it was off to the waterfalls where we were told we could swim! Since it was a hot day (80+) we were excited. We all expected it to be a popular swimming spot, but when we got there there was no one else swimming and the water was FREEZING! Miran assured us that we were allowed to swim, so Jasmine, Emmanuel and I decided to brave the cold water. We were only in for about 10 minutes since it was so cold, but we were glad we did it. Then we had lunch at a restaurant at the base of the waterfalls that consisted of meat and fries. A pretty typical meal in the Balkans.

After lunch we headed up a mountain to where a huge cross is situated.

The mountain was also a strategic bunker during the war and Miran told us his personal stories from the war. It’s very surreal to hear stories from someone who actually lived during and experienced the worst of the war. He told us about how his family had to leave their house because it was situated on the Republic of Srpska controlled side of the city. Luckily, some of their family had a house on the Bosnian controlled side of the city so they were able to seek refuge there. He didn’t talk about it, but he had mentioned before that his grandpa died during the war and his dad was in the Bosnian army so he knows first hand the real cost of war. Just like in Sarajevo, there are lots of bombed buildings and bullet holes strewn all over. When the US stepped in for its own personal financial reasons, it drafted a constitution for Bosnia and Herzegovina in English. Which means that a large population of the country can’t even read the original constitution. Of course it’s been translated, but the original document is in English, which is crazy and sad. It’s clear from the stories I’ve heard from locals that they don’t agree with the US’s interference and subsequent “government takeover”. Luckily though none of them harbor any resentment towards Americans.

After the tour we headed back to Mostar and Jasmine and I headed to the bridge to watch sunset and do some shopping. When we got back to the hostel, Miran cooked us dinner- pasta with tomato sauce and vegetables. It was simple but very good after a long day. We were joined by our roommate David who has been traveling for over a year and makes money by playing guitar/harmonica and singing in the street.

Today was a relatively low key day spent in town. It was really hot, especially with all of the tourists in the old town, so I hung out by the river a lot and walked around just a little bit. In the afternoon I met up with Jasmine and we did some more shopping aka me buying more art. But this time not framed! And the guy put them in tubes so it should be much easier to transport.

Then we headed back to the hostel where I skyped with my parents for a while and then went out to the garden where we met all of the newcomers. There’s an older couple from Australia and a younger one from New Zealand and a young couple and 2 sisters from the states. Miran asked if we were all hungry and when we said yes he said he would have some food delivered and he could get some dessert that we could enjoy while David put on a concert for us. It was a really great evening, enjoying some music and getting to hear everyone else’s travel stories.